Canadian Snowbirds: You May Be Subject to These U.S. Tax Residence Rules Without Even Realizing 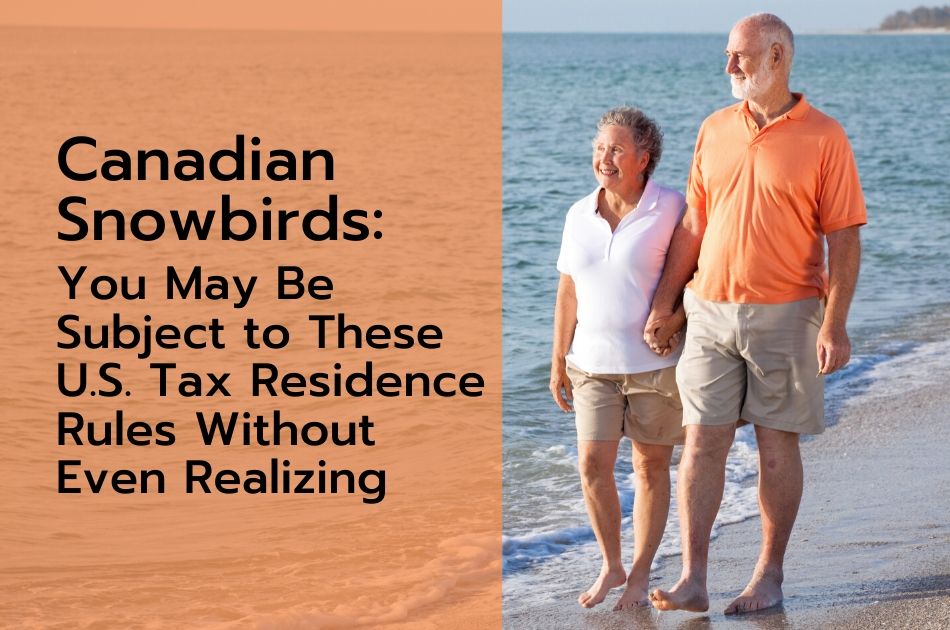 Every winter, over one million Canadian seniors and retired folk move south to the United States to escape the frigid temperatures. While the warmer weather is a welcome change, U.S. taxes for Canadian snowbirds may not be.

With the tax season ongoing, snowbirds who spend their time in the United States have to pay special heed when filing their tax returns. The U.S. tax implications for Canadian snowbirds must be considered well ahead of time to avoid potentially adverse tax consequences on both sides of the border.

Unfortunately, the internet does not always help. There are many myths and misconceptions about U.S. taxation, and sometimes determining what source of information to rely on and what source of information has most up-to-date and accurate framework is not that simple. For instance, some are led to believe that spending 182 days or less in the United States in any given year will not render snowbirds as “residents” for U.S. tax purposes. This isn’t always the case and could, in fact, cause you to inadvertently trip over the U.S. tax residency rules.

In this article, we discuss how you can avoid the financial repercussions, stay compliant with tax residency requirements, and plan for the future so that you don’t accidentally become a U.S. tax resident who is taxed on their worldwide income.

Do Canadian Snowbirds Even Have U.S. Tax Reporting Requirements?

There are certain categories of snowbirds who may be considered U.S. residents for tax purposes and, as such, have a U.S. tax return filing requirement.

Canadians owning and using U.S. real estate for personal purposes only will not have annual filing obligations with regards to that real property. However, if you were to sell your U.S. real property, you will have to file a U.S. tax return for the year during which the sale took place to report any gain realized on the sale to the IRS as well as the state tax authority, depending on where the real property is located. Notably, in many cases, the reason for filing a U.S. tax return would be to claim a refund of U.S. taxes withheld in excess of the Canadian owner’s U.S. tax liability under the Foreign Investment in Real Property Tax Act (FIRPTA) withholding regime.

Importantly, if you own your U.S. real property through an entity (a corporation, partnership or a trust), such entity would generally be required to file a U.S. tax return and report the rental income from personal use of real property.

To successfully complete U.S. tax filings, snowbirds will require an Individual Taxpayer Identification Number (ITIN), unless they have a U.S. Social Security Number (SSN) (this could be true if, for example, the Canadian individual used to work in the United States and obtained SSN for work purposes).

Canadian owners of rental homes in the United States may generally not be required to file a U.S. tax return with the IRS, provided that such real property has been rented out for a period of no more than 15 days during a year.

If the owners rent out their vacation home for more than 15 days during a year or earn rental income from investment properties in the United States, a U.S. tax return may need to be filed with the IRS for each year to report the rental income.

Generally, rental income is subject to a 30 percent U.S. tax withholding on a gross basis (without taking into account any expenses). To be taxed at graduated tax rates applicable to individual taxpayers on a net basis (taking into account certain expenses related to the rental activity), the Canadian owner would need to make a net rental income election. This is generally more beneficial

Canadians with income from U.S. investments

Canadians earning income from U.S. investments will get tax slips at the end of the year indicating their U.S. source income and any U.S. tax withholding. Based on the type of investment, income earned, tax withholding by the investment company and other related factors, Canadians may or may not be required to file a U.S. tax return with the IRS. A tax return would typically be required if a Canadian needs to claim a refund of over withheld U.S. taxes or if there is under withholding of the applicable U.S. tax liability.

If you did not have any U.S. source income, you may still need to file with the IRS Form 8840, Closer Connection Exception Statement for Aliens to claim closer connection to Canada, even if you otherwise meet the substantial presence test. Note that Form 8840 can be filed on a standalone basis or with your U.S. tax return, to the extent you are required to file one (see the discussion above).

Tax season is ongoing! Contact our team today to set your tax affairs in order and make a timely decision that bodes well for your financial future.

How to Protect Yourself From Falling into the Snowbird Tax Trap

You have three main options at your disposal to avoid being deemed a “U.S. resident” by the IRS for U.S. federal income tax reporting purposes. The first targets how to avoid becoming one altogether, the other two talk about how you can potentially qualify for certain exemptions to reduce your tax burden. Note that there are multiple exemptions and additional tax provisions that are used in making a determination of whether an individual should be treated as a U.S. tax resident. We only point out key items. A comprehensive review of the U.S. tax residency rules is beyond the scope of this article.

This is the simplest way for snowbirds to prevent becoming U.S tax residents; making sure you don’t meet the IRS Substantial Presence Test.

Under the Substantial Presence Test, Canadians would be considered U.S residents for U.S. federal income tax purposes if they are physically present in the United States for;

• at least 31 days in the current tax year, AND

• more than 182 days during a three-year period; including the current tax year and the two years preceding it. There is a formula that is used to determine if the 182-day threshold is met.

The taxpayer must combine:

• The total number of days spent in the United States in the current tax year; plus

• 1/3 of the days spent in the United States in the preceding tax year; plus

• 1/6 of the days spent in the United Sates in the year prior to preceding tax year.

By this logic, it is actually possible to spend 183 days or more in the U.S. over the three-year period (without becoming a U.S. resident for U.S. federal income tax purposes) by assigning less weight to the days in the preceding years. As a result, Canadians may be able to proactively plan their U.S. trips to ensure that they do not meet the Substantial Presence Test.

The safe harbor of sorts is 121 days a year – if you spend in the United States not more than 121 days in any given year, you generally should not be treated as a resident for U.S. federal income tax purposes based on the Substantial Presence Test.

Note that even if you met the Substantial Presence Test, you may still be treated as a nonresident alien for U.S. federal income tax purposes.

If you spent in the United States not more than 182 days in a tax year, but meet the Substantial Presence Test due to your stay in the United States in the preceding years, you may be exempt from being treated as a U.S. tax resident by claiming closer connection to Canada.

The following factors are relevant in establishing your closer connection to Canada (the factors outlined below are found in Form 8840):

• Where was your regular or principal home located?

• Where was your family located?

• Where was your car located?

• Where was your car registered?

• Where were your personal belongings, furniture, and other personal effects located?

• Where was the bank(s) with which you conducted your routine personal banking activities located?

• Did you conduct business activities in a location other than your tax home?

• Where was your driver’s license issued?

• If you hold a secondary driver’s license, where was it issued?

• Where were you registered to vote?

• What country you indicate as your residence country when completing official documents and forms (for example, are you using U.S. address on your U.S. tax return)?

• In what country or countries did you keep your personal, financial, and legal documents?

• From what country did you derive the majority of your income in the current tax year?

• Did you have any income from U.S. sources?

• In what country or countries were your investments located?

• Did you qualify for any type of “national” health plan sponsored by a foreign country?

This closer connection exemption aims to assess whether, notwithstanding meeting the Substantial Presence Test, you have maintained more significant contacts in Canada than in the United States and as such should be treated as a Canadian tax resident.

Canadians who have spent more than 182 days in the United States, may still be able to be treated as Canadian tax residents. They can file a U.S. non-resident tax return, Form 1040NR, and claim an exemption under the Canada – U.S. income tax treaty.

Along with this Form, you will also have to file Form 8833, Treaty-Based Return Position Disclosure Under Section 6114 or 7701(b).

If you got to this point, it is usually because both Canada and the United States treat you as the tax resident of each country. In that scenario, the treaty tie-breaker provisions may allow the IRS and the CRA to determine if you should be treated as a tax resident of Canada or the United States. The determination is based on all facts and circumstances and is looking to several factors in making that determination.

Specifically, Article IV.2 of the Canada-U.S. income tax treaty provides the following factors that need to be analyzed if both Canada and the United States treat a person as a tax resident of both countries):

• if the center of vital interests cannot be determined, the person shall be deemed to be a resident of the country in which he has an habitual abode;

• if the person has an habitual abode in both Canada and the United States or in neither country, they shall be deemed to be a resident of that country of which he is a citizen.

If based on the above factors the CRA and the IRS are unable to agree on the determination of whether a Canadian should be treated as a resident of Canada or the United States for tax purposes, then the competent authorities of Canada and the United States would settle this issue by mutual agreement.

You should contact a qualified U.S. tax advisor to navigate the applicable rules and make sure you interpret the applicable tax provisions correctly. It is even more critical in case you are solely treated as a nonresident alien individual for U.S. federal income tax purposes based on the application of the treaty tie-breaker rules – you may still be required to file certain U.S. international information returns and Report of Foreign Bank and Financial Accounts (FBAR)!

Not Sure How to Proceed? We Help You Take Advantage of the Right Exemption and Avoid Paying Unnecessary Penalties.

U.S. Tax IQ can help. Our trusted U.S. tax advisors advise on U.S. and cross-border tax issues and can prepare your U.S. tax returns so that you can avoid penalties, optimize your taxes, and avoid double taxation.

Canadian snowbirds should not have any issues with U.S. tax law, so long as they plan ahead and proceed with all the right information on hand.